Shopping Cart
Your Cart is Empty
Quantity:
Subtotal
Taxes
Shipping
Total
There was an error with PayPalClick here to try again

Thank you for your business!You should be receiving an order confirmation from Paypal shortly.Exit Shopping Cart

"Do you remember I said there would be a special place for you in the Pack? This is in your Six. Every Pack is divided up into groups with about six Brownies in each. The group or Six is led by one of the older Brownies who is called the Sixer. She wears two yellow stripes on her arm, and her Second, who helps her, wears one.

In the olden days, when people believed in the fairy-folk Brownies, they called them by different names in different parts of the country. Nowadays, in Packs, we use these names for the Sixes, and everyone wears an emblem to show in which Six she belongs, and tries hard to carry out the words of her Six song which she learns by heart."

The original Brownie Sixes were: Bwbachod, Elf, Fairy, Gnome, Imp, Kelpie, Leprechaun, Little People, Pixie, Sprite, Tylwyth Teg. In the 1920s a further Six was added, Ghillie Dhu, so that there would be two Scottish Sixes, as well as two Welsh and two from Ireland. In 1968 three of the Six names were dropped - Fairy, Little People, and Tylwyth Teg - and at the same time, the Six Rhymes were dropped.. And in the early 2000s, some animal names were introduced, as an alternative to fairy folk - Badger, Fox, Hedgehog, Mole, Rabbit, Squirrel - and at the same time the style of the badges changed from Brown rectangles to blue ovals, with the fairy folk characters becoming more cartoon in style, although retaining the same poses and outfits. 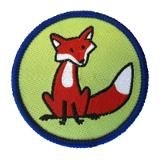 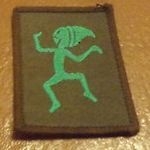 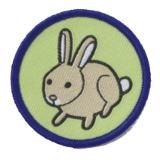